An Intelligent Person's Guide to Philosophy 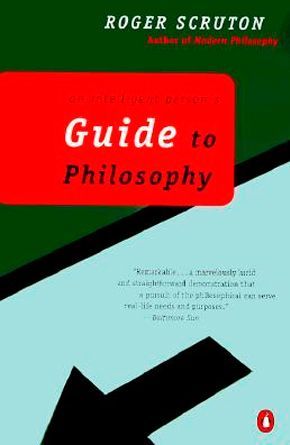 Penguin Books (1996)
"Philosophy's the 'love of wisdom', can be approached in two ways: by doing it, or by studying how it has been done," so writes the eminent philosopher Roger Scruton. In this user-friendly book, he chooses to introduce philosophy by doing it.

Taking the discipline beyond theory and "intellectualism," he presents it in an empirical, accessible, and practical light. The result is not a history of the field but a vivid, energetic, and personal account to guide the reader making his or her own venture into philosophy. Addressing a range of subjects from freedom, God, reality, and morality, to sex, music, and history, Scruton argues philosophy's relevance not just to intellectual questions, but to contemporary life.

In An Intelligent Person's Guide to Philosophy, Roger Scruton aims to present neither a history nor a survey of the subject (goals he's already met in his Modern Philosophy and A Short History of Modern Philosophy). Rather, he attempts to make philosophy interesting by showing why it is interesting to him. Thus the book's 12 short chapters deal not only with philosophy's old standards--truth, time, freedom, God--but also with topics that not all philosophers would regard as central, such as sex and music. The views of other philosophers peek through from time to time: several pages are devoted to savaging the French historian Michel Foucault and the American jurist Richard Posner, while the influences of Scruton's philosophical heroes, Kant and Wittgenstein, are detectable everywhere. Still, Scruton's primary concern is to present the problems and lay out their possible solutions as he sees them. True to the standards of the Anglo-American tradition of philosophy to which he declares allegiance, Scruton writes clearly, precisely, and honestly. At times he can be unnecessarily cagey: there is no telling, for example, on the basis of his chapter on God whether he in fact believes in God. But for the most part he is forthright, even when espousing controversial positions, such as claiming a uniquely privileged moral status for heterosexual monogamy. All in all, the intelligent person who reads Scruton's book can expect to learn how another intelligent person, who has thought long and hard, views philosophy. --Glenn Branch